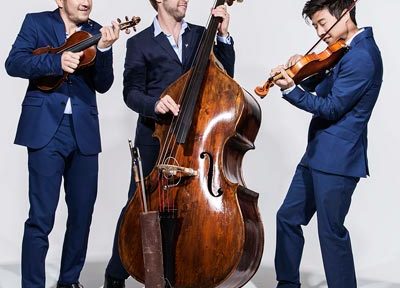 Known for their genre-bending concerts, the ensemble’s eclectic variety of styles include classical, jazz, Appalachian, rock and hip-hop.

The performance will begin at 7:30 p.m. in Haggin Auditorium. It is part of the Smith Concert Series. Go here for free tickets.

“Time for Three was an absolute sensation when they performed with the Lexington Philharmonic a few years ago, and since then their international reputation has grown,” Transylvania music professor Greg Partain said. “We’re thrilled we were able to entice them to Transy for a full-length concert.”

Time for Three is known as a “classically trained garage band” with astonishing virtuosity and a relaxed style.

“In person, the members of Time for Three come off as just three dudes in a band,” according to National Public Radio. “But with their staggering technique and freewheeling genre-crossing, it’s hard not to be swept up in the force of their contagious energy.”

Time for Three has performed in venues that range from Carnegie Hall to NFL games and the Indy 500. They hold a successful residency with the Indianapolis Symphony Orchestra.

The Smith Concert Series at Transylvania was created in 2007 by the late Dorothy J. Smith, a 1942 graduate, to bring high-quality musical performances to campus. The series is named for Smith and her late husband, Fred K. Smith, a 1940 graduate. Previous concerts in the series include Canadian Brass, Kronos Quartet, Tiempo Libre, the Rose Ensemble, Home Free and Eileen Ivers.

Haggin Auditorium is off Fourth Street in the Mitchell Fine Arts Building, which is wheelchair accessible. Plenty of free, nearby parking will be available.

Located in the heart of downtown Lexington, Transylvania is ranked in the top 15 percent of the nation’s four-year colleges by The Princeton Review, which cites its community-driven, personalized approach to a liberal arts education through 40 majors. Founded in 1780, it is the 16th oldest institution of higher learning in the country, with nearly 1,100 students.