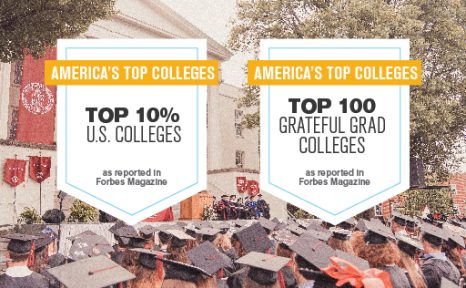 Transylvania places among the top 10 percent of U.S. colleges for general return on investment—measures such as post-graduate success, satisfaction and student debt—and among the top 4 percent of colleges in grad donations and participation rate.

“These rankings reinforce what we already know: Our strong liberal arts tradition provides students with not only the skills that employers value but also with an experience that will help them lead meaningful lives,” President Seamus Carey said.

Transylvania takes extra steps to ensure its grads excel. For example, the 100 Doors to Success mentorship program pairs students with alumni who have a wealth of work and life experience to share.

Successful outcomes are at the heart of the Forbes lists.

America’s Top Colleges 2016 ranks schools not by what it takes to get accepted into them (such as SAT scores), but by how students benefit from attending these institutions. “It is our answer to the debate over whether higher education is worth it: For these outstanding institutions, we give a resounding yes,” according to Forbes.

In addition to considering salary, the Top Colleges list measures success through achievements such as leadership and innovation.

The business magazine’s 2016 Grateful Grad Colleges measures return on investment in a different way—monetary support by alumni. “The best colleges produce crop after crop of successful graduates that show their appreciation by giving back in the form of donations to their beloved alma mater,” according to Forbes.

Among the 100 highest-ranked colleges on this list, Transylvania is in the top 15 when it comes to the average alumni participation rate over the three most recent years. This spirit of giving continues to grow, as the university set a record for monthly donations in June.

“We are thankful to have some of the most dedicated and generous alumni in the country,” President Carey said.