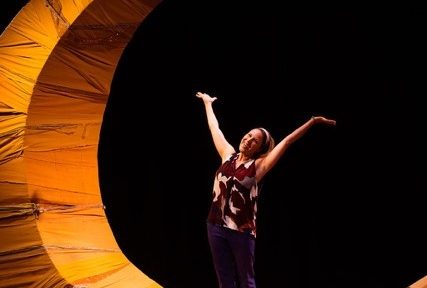 The Project SEE production, directed by professor Sullivan Canaday White, will run Thursday through Saturday at 7:30 p.m. and Sunday at 2 p.m. in Little Theater.

The new comedy by Ginna Hoben was hailed by critics at its Washington, D.C., premiere last fall as both a “tale of life at its very existential core” and “a funny surprisingly raw show.”

The script is inspired by Hoben’s pregnancy blog, “bambino & the bean,” which charted the highs and lows of pregnancy at an “advanced maternal age” – 40.  “With candor typical of a late-night college gabfest,” notes Washington Post reviewer Jane Horwitz, Hoben’s character, Jenn, “launches into her tale. She always wanted to be a mom but wasn’t quite ready. And when she finally was ready, getting pregnant was tough.”

“This is a performance that celebrates the power of storytelling,” White said, “much like Hoben’s first play, ‘The Twelve Dates of Christmas,’ produced by Project SEE in 2011.” Project SEE is a Lexington theater company.

Hoben is an actor, playwright and TV writer/producer who lives in New York City. (Her works include the Emmy-nominated “Brain Games.”)