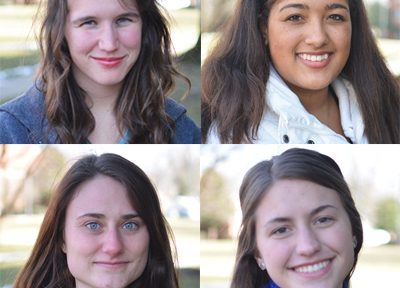 Samantha Easterling of Wilmore, Ky., McKenzie Gearheart of Pikeville, Ky., Erin Marek of Pataskala, Ohio, and Courtney Smith of Batavia, Ohio, have all been selected based on academic and professional achievement, as well as demonstrated leadership potential.

In the past 10 years, 17 Transylvania students have received Fulbright English Teaching Assistantships, including four last year who are currently serving in Thailand, India, Malaysia and South Korea.

“We’re extremely proud of these students,” President Seamus Carey said. “They follow a long line of recent Transylvanians who have been awarded Fulbright grants. It’s evident they are putting in hard work and are receiving excellent preparation from their professors and staff advisers.”

“Being named a semifinalist is a testament to the unmatched education I’ve received at Transylvania as well as a validation of all of my hard work these past four years,” said Smith, who is a semifinalist for the Slovak Republic. “I feel so fortunate to be considered for this prestigious award and sincerely hope that Transylvania is well represented when the final grants are released.”

The Fulbright Program was established in 1946 as the flagship international educational exchange program and operates in more than 160 countries.

“Knowing I might be spending a year in Mongolia seems like something I could only dream of,” Marek said. “My art history professor Nancy Wolsk and director of study abroad Kathy Simon put so much effort into helping me with my application, and I would have never made it this far without them.”