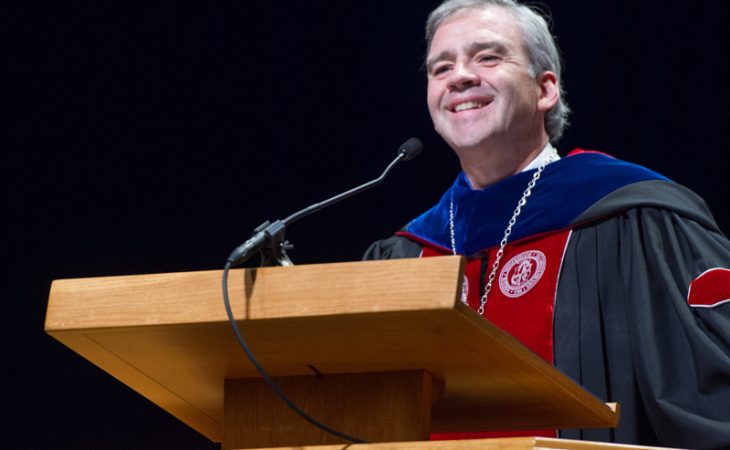 Carey, who became president in July of 2014, is transforming the university through positive changes such as the appointment of Laura Bryan as vice president for academic affairs and dean of the university, the 100 Doors to Success mentoring program and the Project One diversity initiative. Other innovative improvements are campus-wide building projects that include the construction of three new residence halls and the renovation of the J. Douglas Gay Jr./Frances Carrick Thomas Library and the Haupt Humanities Building.

“Dr. Carey has already had a significant impact on Transylvania,” said Chairman of the Board of Trustees William T. Young Jr. “His leadership exemplifies his passion for renewal and devotion to the liberal arts.”

Young presented Carey with the Presidential Medallion during the installation ceremony. Distinguished visitors and speakers included presidents and officials from other universities and Lexington Mayor Jim Gray.

The installation ceremony was the culmination of the four-day Celebration of Transylvania, which included events such as an All-Campus Picnic, concert by renowned Celtic fiddler Eileen Ivers and the dedication of Alumni Plaza.

Before coming to Transylvania, Carey served as dean of the College of Arts and Sciences at Sacred Heart University in Connecticut. Also, at Manhattan College he was chair of the philosophy department and School of Arts curriculum committee, a member of the faculty senate and director of the Center for Professional Ethics.

He earned an undergraduate degree in economics from Vassar College and an M.A. and a Ph.D. in philosophy from Fordham University.

Carey, who authored three books that focus on philosophy and parenting, has a wife, Noreen, and three children.

In addition to advocating liberal arts for personal and professional development, he has a particular interest in 20th century continental philosophy, ethics and environmental philosophy.