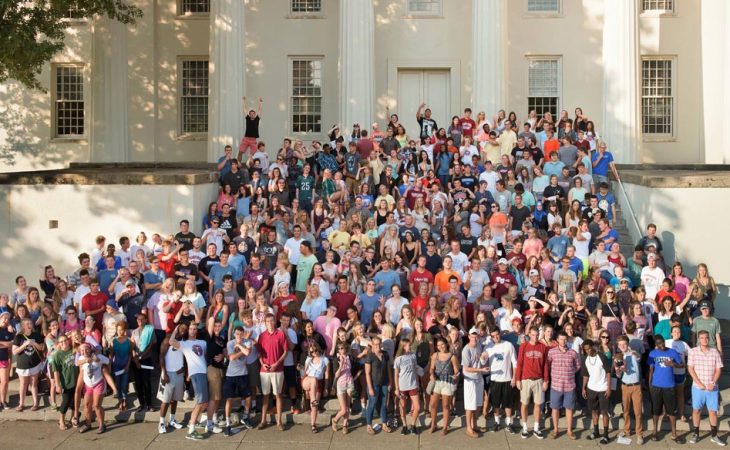 The university increased its number of first-year students by 19 percent over last year. The 327 new students bring the school’s total enrollment up to 1,065.

The Class of 2019 also adds to diversity at Transylvania, furthering a main goal of its Strategic Enrollment Plan. About 20 percent of our incoming students identify themselves as members of racial or ethnic minorities. Additionally, a quarter of the class is from outside Kentucky—including locales as far away as Rwanda and Vietnam.

Transylvania’s first-year students also will ensure the tradition of academic excellence continues at the school, which the Princeton Review recently included in the top 15 percent of the nation’s four-year colleges. Twenty-one of our new students graduated from the Governor’s Scholars program; two are alums of the Governor’s School for the Arts; and eight were National Merit Finalists.

“Our students’ academic interests are diverse, with many of our incoming students expressing an interest in getting a great education at Transy followed by graduate school in areas such as medicine, dentistry, engineering and law,” said Rhyan Conyers, interim vice president for enrollment. “Our curriculum prepares those students to go on to great graduate programs or find compelling careers.”

Transylvania’s first-year students participate in a three-week program called August term. During this time, they engage in an academic seminar and acclimate to life on campus before the rest of the students arrive in early September. This year’s August term theme is “Reading the Stories of Us: Histories of Entanglement.”

“We are proud of all of our new students and how they are already engaged with each other and our campus community,” Conyers said.

They arrive at Transylvania during a time of great renewal. The university is building three new residence halls and renovating its library. The school also plans major renovations to its iconic Haupt Humanities Building and has just finished construction of a gathering place in the heart of campus called Alumni Plaza.