Last month at the Pi Kappa Delta Nationals in Athens, Ohio, team member Taylor Deaton of Richmond placed fifth in the nation in extemporaneous speaking and won an All American award. Teammate Rebecca Radcliffe of Lawrenceburg was an All American finalist.

Later in March at the Kentucky Forensics Association tournament—which the University of Kentucky hosted on Transylvania’s campus—Radcliffe and Deaton were state champions in parliamentary debate, and Deaton was state champion in extemporaneous speaking.

“Taylor and Rebecca are both incredibly deserving of this recognition,” coach Gary Deaton said. “They are both phenomenally successful competitors, tremendous leaders for our program and exceptional ambassadors for the speech and debate activity. They have led Transylvania through four of our most successful years. ” 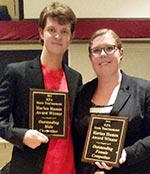 The Hamm Award recognizes those who represent the ideals of forensics competition. Harlan Hamm, who was a coach at Rowan County High School and Morehead State, was not only tremendously successful but also known throughout the state and national forensics community for his student-centered and ethical approach.

Another top award went to Transylvania alum Raven Mineo Webster, who is the school’s associate director of forensics. The KFA’s Student Organization recognized her as the Coach of the Year for 2015. As a student, she won numerous state championships and was an All America finalist.

– Radcliffe and Jody Robinson of Elizabethtown, 25th in open parli

– Joey Gearon of Hodgenville, fourth in radio broadcasting and fifth in impromptu and editorial impromptu