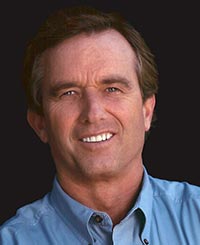 A reception will immediately follow in Carrick Theater. Tickets are sold out.

“We are very excited to have a speaker the stature of Robert F. Kennedy Jr. here,” said psychology professor Meg Upchurch, who coordinates the lecture series. “His talk about how we can create jobs by developing environmentally sustainable industries should appeal to people from across the political spectrum. All of us who have a stake in the future of Kentucky can benefit from hearing ideas about possible directions the economy can take in the 21st century.”

Sustainable business and energy independence are keys to our economic revitalization. America can boost its own infrastructure by powering industry with plentiful and domestic renewable resources. With his trademark passion and topical expertise, Kennedy outlines how a sophisticated, well-crafted energy policy will help sharpen American competitiveness while reducing energy costs and our national debt. Intelligent energy policy is also the national fulcrum for U.S. foreign policy and national security. From career opportunities in sustainability and technologies to weaning our reliance on carbon energy, Kennedy offers a bold vision to restore U.S. economic might, safeguard our environment, and re-establish America’s role as an exemplary nation.

Transylvania’s Kenan lecture series and is funded by a grant from the William R. Kenan Jr. Charitable Trust.