Throughout America, there’s a persistent national debate about the value of a liberal arts education. A day seldom passes when a new study doesn’t appear about student debt, unemployed graduates, the need for professional training and, the perennial question, “Who needs to study Plato anyway?”

What we once took for granted in higher education has been turned on its head. The scrutiny of the liberal arts comes at a time when the economic performance of the United States has been languishing for more than six years.

As a result, colleges are not only being forced to control costs but also to innovate and invest more in their students to keep up with the competition. For a university to be competitive nowadays, it must offer more than a good education. At many schools, large sums of donor dollars are being funneled into infrastructure projects, such as new dormitories, dining halls, fitness centers and even state-of-the-art climbing walls, which supporters justify as necessary to attract the best students.

Unfortunately, these projects are often financed at the expense of budget items that directly benefit students’ academic learning. Money that should support faculty development or hands-on experiences to complement classroom learning is being used to service the debt on expansive building projects. While many colleges recognize this trade-off, the justification for such spending is that students won’t come at all if their college doesn’t keep up with the Joneses.

Schools have also responded to pressure to provide more value for tuition dollars by altering the curriculum. Parents and the business sector want degrees that will land students jobs when they graduate. This has called into question the value of the liberal arts for those who don’t see a direct connection between an English or history degree and a place in the job market. Studying The Republic has little to bear upon an entry-level job in wealth management, or so the theory goes.

Everyone is questioning the correlation between the liberal arts and a hefty annual salary. However, a survey of employers conducted last year by the Association of American Colleges and Universities showed that 80 percent believed every college student needs “broad knowledge in the liberal arts and sciences,” regardless of what they majored in.

In addition, 93 percent of those surveyed agreed with the statement that “a candidate’s demonstrated capacity to think critically, communicate clearly and solve complex problems is more important than their undergraduate major.” That, in short, is one of the essential outcomes of a broad-based liberal arts education—to teach students to be critical thinkers, clear communicators and problem-solvers.

While these skills are essential and the liberal arts are being reconstituted so they more obviously apply to job opportunities, we need to be careful about reducing a liberal arts education to the development of skills. As the late Steve Jobs and other great innovators have believed, the liberal arts actually are most valuable when they push students beyond the status quo, toward ideas, theories and debates previously unimagined.

Curricular innovations and complementary programs that are most effective increase the value of a liberal arts education without devastating the budget. They are programs that change the way students see the world while helping them develop the skills and the confidence to pursue lines of work that are vital. 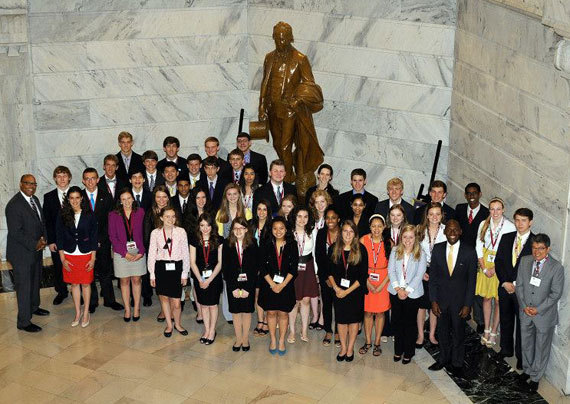 Members of the 2014 Henry Clay Student Congress gather in front of the statue of Henry Clay in the marble halls of the Kentucky capitol. Photo by Bogdan Pater of the Henry Clay Center for Statesmanship.

Such a program was recently completed on the campuses of Transylvania University and the University of Kentucky in Lexington, Ky., under the auspices of the Henry Clay Center for Statesmanship. Rising high school seniors from across the country were exposed to the legacy of Henry Clay, known in his day as “The Great Compromiser.” Students attended panels on world issues in desperate need of compromise and diplomacy, such as Russia and Ukraine, and Israel and Gaza. They also debated major issues of our time. Professors of communication helped shape their arguments and prepare them.

What the Student Congress did most effectively was inspire students. In the process, they underwent a life-changing experience, which is at the heart of a liberal education. At the awards dinner, a student said that the congress changed his life and that he had a new appreciation for the importance of integrity, consensus building, conflict resolution and compromise. Indeed, there were many lessons that could benefit our congressional leaders.

This is the type of innovative program that adds the most value to a student’s education and, in turn, to a student’s life. Young people inspired by such an experience aim high, transcending the limited pursuit of a first job with ideals that reach to the very corners of our world. They will be the CEOs, the entrepreneurs, the leaders and conscience of our society—and yes, the statesmen of our future.

The Henry Clay Center Student Congress, where young people learn to ask both “Why?” and “Why not?” when confronting the world’s problems and seeking solutions, is an innovation of liberal education that does not diminish the core mission of the liberal arts, but rather strengthens it. And it does so without damaging the budget.