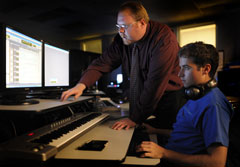 “Why isn’t there a word rhythm dictionary?” Tim Polashek once wondered.  He no longer asks. No need. The Transylvania University assistant professor of music got busy responding to his own question, resulting in publication of “The Word Rhythm Dictionary: A Resource for Writers, Rappers, Poets, and Lyricists” (Rowman & Littlefield), a 689-page gold mine for the creative-yet-stumped.

“I really just see this as another tool,” said Polashek. “Tools matter in that they offer different perspectives and methods and can shape direction of creativity. For example, some computer programs allow easy reversing of melodic motives. Others don’t. This affects creativity. I’m constantly asking myself and my students how a given tool shapes creativity and they can be objective about the tool.”

Rhythm rhymes are defined in the introduction as two or more words with the same rhythm, sharing the same number of syllables “and relative positions of primarily accented, secondarily accented and unstressed syllables.” Unlike traditional rhymes, rhythm rhymes need not have matching vowel sounds.

Polashek said the book is an expression of his longtime interest in the relationships between music and speech as well as the pitch and rhythms of spoken speech.

He has created a series of computer programs to help him manipulate and search for words with certain properties for creative projects. “For example, show me all the words that have two ‘T’ sounds and a ‘Z’ sound.  Or, show me 10 words that are five syllables long that have accents on the third syllable.”

He also has written programs to generate nonsensical text with certain musical properties. “So, when I got around to actually writing the dictionary, I had a lot of software tools to help me.”

The typical rhyming dictionary groups words based on vowel sounds and is primarily concerned with the vowels at the ends of words. The “Word Rhythm Dictionary” takes a different approach, grouping words by several properties:  syllabic stress (primary, secondary and unstressed), which determines the rhythm tendencies of the word; vowels, which lead to secondary sorting; and consonants. “So as you read the rhythm-rhyme groups, there is movement along a timbre/word sound continuum,” he explained.

The approach, said Polashek, makes it easier to locate words that feature similar sounds, matching meters and rhythmic grooves, from traditional rhymes like “clashing” and “splashing,” to near rhymes like “rollover” and “bulldozer,” to pure metrical matches, like “biology” and “photography.”

“Upon observing a couple of words in the same group, some interesting scene or semantic concept might pop into mind that will generate a line of poetry or a lyric, perhaps reflecting some subconscious things that the writer had been considering—a linguist Rorschach test, perhaps?”