LEXINGTON, Ky.—Transylvania University will host a U.S. Citizenship and Immigration Services Naturalization Ceremony on March 21, 2014, in which more than 200 individuals representing more than 70 countries will take the Oath of Allegiance, completing the path to American citizenship. 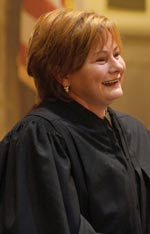 Karen Caldwell, chief judge, U.S. District Court for the Eastern District of Kentucky, will preside. Caldwell, a 1977 graduate of Transylvania, is a member of the university’s Board of Trustees.

Plans call for Transylvania student Esi Kalefe ’14, a naturalized citizen from Togo, to welcome those in attendance. Vivian Tsai ’16 of Taiwan will lead the Pledge of Allegiance.

Administering the Oath to candidates will be Nathan W. Lee, chief deputy clerk, U.S. District Court for the Eastern District of Kentucky. Lee is a 1997 graduate of Transylvania.

With citizenship candidates coming from all around the Commonwealth, the ceremony is scheduled to begin at noon in Haggin Auditorium and is open to the public. Shuttle service to the auditorium will be provided from parking lots next to and directly across from Transylvania’s new Athletics Complex on West Fourth Street, just west of the intersection with Jefferson Street.

Here is the Oath of Allegiance, which has led to American citizenship for more than 220 years.