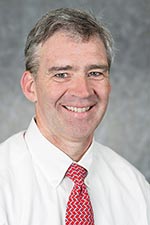 LEXINGTON, Ky.—Seamus Carey, dean of the College of Arts and Sciences at Sacred Heart University in Fairfield, Conn., has been selected to serve as the 26th president of Transylvania University, effective July 1, 2014.

Carey, who received a Ph.D. in philosophy from Fordham University, will succeed Owen Williams at the historic Lexington, Ky., liberal arts institution. Williams was named president in 2010.

“Dr. Carey was chosen from a strong pool of candidates because of his dedication to the liberal arts and his academic and administrative experience, first as a philosophy professor and most recently as dean,” said William T. Young Jr., chairman of Transylvania’s Board of Trustees.

As dean at Sacred Heart, Carey designed and implemented a performing arts minor and the Great Challenges Curriculum, which consists of four interdisciplinary minors: civic engagement, civil society and the common good; ecology and the global community; equality, wealth and philanthropy; and scientific literacy for the 21st century.

He also revised the university’s First-Year Academic Experience to include first-year seminars and The Art of Thinking, a course in introductory logic that provides students with the tools they need to become careful readers, clear thinkers and strong writers.

To support some of these new programs, Carey developed a four-year faculty hiring plan that created 15 new faculty lines, funded by increased retention of first-year students.

Carey attended Harvard’s Management Development Program and the Executive Leadership Academy sponsored by the Council of Independent Colleges. At Sacred Heart, he supervises 121 full-time faculty, 18 department chairs and eight graduate program directors. Sacred Heart has 3,600 undergraduate and 650 graduate students and an annual budget of $25,825,000. As part of his development efforts, Carey has overseen the expansion of Sacred Heart’s campus in Dingle, Ireland.

Carey was selected by the Transylvania Board of Trustees following an intense week of campus forums during which four finalists met with the Transylvania community. Faculty, students, staff and alumni were invited to question each candidate and offer observations in an online survey.

“I am honored to receive this appointment,” said Carey. “I look forward to joining the Transylvania community.”

Carey lives with his wife, Noreen, and three children in Pelham Manor, N.Y.