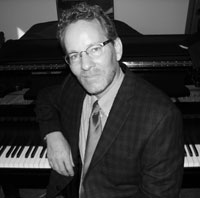 LEXINGTON, Ky.―Pianist John Mortensen presents “Off the Cuff,” a recital composed entirely of improvisations in classical, jazz and contemporary music on Wednesday, March 5, at 7:30 p.m. The concert, in Transylvania University’s Carrick Theater, is free and open to the public.

“I will improvise in several different styles and then describe briefly how improvisation works and what to listen for in each style,” explained Mortensen.

His concerts may start with music of Bach, venture into improvisation, and end with music from the Canadian indie rock band The Arcade Fire or music composed by Leonard Cohen.

After a concert in Eisk, Russia, the Russian press wrote that “… for John Mortensen Russia has always been close musically. He plays with especial passion the works of Sergei Rachmaninoff. ‘I don’t speak Russian, I speak Rachmaninoff,’ was heard from the mouth of the pianist during the concert. And truly, during the performance of the work of the great Russian composer, in the hall peoples of different nationalities disappeared—it seemed from the stage sang and wept the Russian soul. The chords of the next Rachmaninoff prelude had not even been played, and the hall was already conquered.”

Mortensen’s recital is part of Transylvania’s Creative Intelligence Series, which also includes art exhibitions as well as lecturers who have creatively solved social problems and bettered their communities.