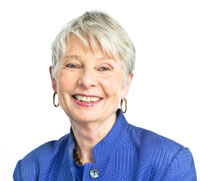 LEXINGTON, Ky.—Author and political commentator Eleanor Clift will be a guest at Transylvania University during the week of January 27, visiting classes and holding discussions with students.

On Tuesday, Jan. 28, at 7:30 p.m., she will present a public lecture titled “Everybody Loves to Hate Washington: Are They Right?” in the Campus Center. A book signing will follow. The event is free, and free parking is available in Transylvania lots along Fourth Street.

The public and media also are welcome to join Clift immediately following her book signing for a viewing and discussion of President Obama’s State of the Union address, also in the Campus Center. President Obama is scheduled to address Congress and the nation at 9 p.m.

“Eleanor Clift is a remarkable woman with an in-depth knowledge of national and international politics and an impressive personal history in the media,” said Transylvania psychology professor and event organizer Meg Upchurch. “We are delighted that she agreed to be this year’s Woodrow Wilson Visiting Fellow. Her weeklong residency on campus will give members of the Transylvania community several opportunities to conduct in-depth discussions with her. We also look forward to people from Lexington and the surrounding area joining us for her public events.”

The Hunter College graduate began her career as a secretary to Newsweek’s national affairs editor in New York. She was one of the first women at the magazine to move from secretary to reporter.

During her career, Clift has covered every presidential campaign since 1976 and served both as Newsweek’s White House correspondent and its congressional and political correspondent. She was a key member of Newsweek’s 1992 election team, following Bill Clinton’s campaign from the start to inauguration day. In June 1992 she was named deputy Washington bureau chief and in 1994 became a contributing editor for Newsweek.

Clift and her late husband, Tom Brazaitis, who was a columnist for the Cleveland Plain Dealer, wrote two books together, “War Without Bloodshed: The Art of Politics” and “Madam President: Shattering the Last Glass Ceiling.” Clift’s book “Founding Sisters” is about the passage of the 19th amendment giving women the vote. In “Two Weeks of Life: A Memoir of Love, Death and Politics,” she recounts the loss of her husband and examines how we deal with death in America. Her most recent book, “How to Select a President,” was co-authored with Matthew Spieler and written as a civics lesson for high school and college students.

Clift is a regular panelist on the syndicated talk show “The McLaughlin Group.” She has appeared as herself in several movies, including “Dave,” “Independence Day,” “Murder at 1600,” “Rising Sun” and the CBS series “Murphy Brown.”

Clift now contributes to the digital edition of Newsweek and its sister website, the Daily Beast. She writes on the Washington power structure, the influence of women in politics and other issues of policy and personality.

She is currently assigned to cover the White House and is particularly interested in how Obama and the Republicans are approaching the 2014 midterm elections, with the balance of power at stake in both the Senate and House.

For more information about her Lexington appearance, contact Tom Martin in Transylvania’s communications office at 859-494-3469 or tmartin@transy.edu. The Campus Center is located on the southwest corner of North Broadway and West Fourth Street. Free parking is available in the university’s general parking lots along Fourth Street.