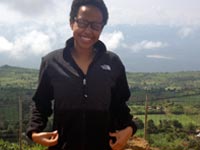 LEXINGTON, Ky.—Should humans use animals to grow new ears? Should we attempt to revive extinct species like the passenger pigeon or the wooly mammoth? How shall we care for our aging human population? What ethical and philosophical challenges are raised by such questions?

These are examples of the heady issues confronting participants in the annual Summer Institute offered by Yale University’s Interdisciplinary Center for Bioethics.

Transylvania has awarded Lydia Lissanu ’15 of Somerset, a sociology major with a biology minor, a full scholarship to the program, which brings together undergraduate and graduate students from around the world for two months each summer. Because of the success of previous Transylvania participants, Yale has reserved a spot for a Transylvania student since 2009. Transylvania selects the student from a pool of applicants and covers the enrollment fee.

“I feel really blessed,” said Lissanu of being chosen for the Yale seminar. “It’s an honor. I hope that I can make the school proud when I’m there.”

Participation in the program will afford Lissanu, who is on a pre-med, pre-public health track with plans to pursue a career in global health, the opportunity to study with an esteemed group of professors from Yale and other institutions. She was drawn to the program’s interdisciplinary focus, which is similar to the approach of several of her Transylvania courses.

“She was really an extraordinary candidate,” said Jack Furlong, a Transylvania philosophy professor who’s on the selection committee. “She’s perfectly suited for a career in global public health.”

Three other students from Transylvania have also been accepted into the 2014 program: Kim Kasama ’16 and Ben Lyvers ’15, both from Bardstown, and Kimberly Strickland ‘16, from Goshen. Students will participate in lectures, seminars, field trips and a final “mini conference,” during which they are required to present a research paper. Discussion topics may range from genetic testing to environmental law, from technology and ethics to feminist approaches to bioethics.

Jeremy Paden, associate professor of Spanish at Transylvania, related how these students’ experiences at Yale can benefit others on the campus. During a recent August term—the three-week program when first-year students get their initial taste of the interdisciplinary study typical of a liberal arts institution—Paden co-taught with an upperclass student who had recently attended the Summer Institute at Yale.

“In our last day of class, my August Term Scholar, a biology major who was selected to attend Yale’s Interdisciplinary Bioethics Summer Institute, led our class through a series of philosophical thought experiments to illustrate the difficulty of ethical consistency when wrestling with big questions. It was a discussion germane to the class, but one which I, someone fully planted on the literary side of the humanities, could not have addressed with the same clarity and authority as he, in his quiet and unassuming way, did.”

For more information about Transylvania’s strong connection with the Summer Institute at Yale, contact Furlong at jfurlong@transy.edu or 859-233-8160.