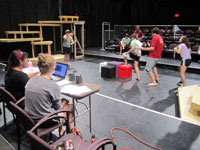 “Repertory implies the same cast in all the shows,” explains Sullivan Canaday White, assistant professor of theater and the theater program director. “However, we are rotating all the student actors and the directors for each show. That means we can have first-year students in major roles and no overlap among the actors and technicians.

A total of 30 students will present three plays that range from drama to comedy. All performances will be in Transylvania’s Lucille C. Little Theater.

According to White, “Each play will have a distinct set design and related costuming. For example, ‘Yellow Boat’ is very colorful and imaginative.  And ‘Lloyd’s Prayer’ features raccoons and a fantastically giant fish costume.”

To encourage audiences to enjoy all three shows, tickets are discounted when bought together. In addition, everyone who attends a play’s opening night will receive a lapel button designed by the theater program. The goal is to collect all three buttons.


Tickets for students are $2 each or $5 for all three shows. General admission is $5 each or $10 for all three shows. Tickets can be reserved by calling the box office at 859-281-3621 from 1-4 p.m. The box office, located in the Lucille C. Little Theater, is also open 30 minutes prior to performances. For more information, contact Transylvania’s fine arts office at 859-233-8141.