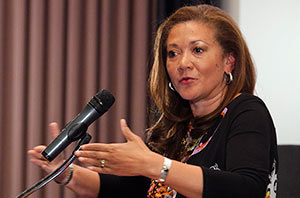 LEXINGTON, Ky.—Michele Norris, award-winning journalist and host and special correspondent for National Public Radio, will speak at 7:30 p.m. Oct. 8 in Transylvania’s Haggin Auditorium  as part of the Kenan Lecture Series, funded by a grant from the William R. Kenan Jr. Charitable Trust.

This lecture is part of Transylvania’s year-long program, Still Overcoming: Striving for Inclusiveness, and is free and open to the public.

Norris will discuss her book “The Grace of Silence: A Memoir,” which focuses on how America talks about race and explores her own family’s racial legacy.

Before coming to NPR, Norris was a correspondent for ABC News. As a contributing correspondent for the “Closer Look” segments on “World News Tonight with Peter Jennings,” Norris reported extensively on education, inner city issues, the nation’s drug problem and poverty. She has also reported for the Washington Post, Chicago Tribune and Los Angeles Times.

Norris has received numerous awards, including the 2009 Journalist of the Year award from the National Association of Black Journalists and their 2006 Salute to Excellence Award for her coverage of Hurricane Katrina. In 2007 she was honored with Ebony Magazine’s eighth annual Outstanding Women in Marketing & Communications Award and in 2009 was named one of Essence Magazine’s 25 Most Influential Black Americans. Norris also earned both an Emmy Award and a Peabody Award for her contribution to ABC News’ coverage of 9/11.

A reception and book signing will immediately follow the presentation. For more information, contact Meg Upchurch at mupchurch@transy.edu.

Before the evening presentation, Norris will meet with the campus community to talk about The Race Card Project, an interactive conversation she initiated in 2012 to encourage citizens to share their thoughts about race.

Norris explains how The Race Card Project works: “Think about the word ‘race.’ How would you distill your thoughts, experiences or observations about race into one sentence that only has six words?”

The responses Norris has received to that question are poignant, powerful and poetic. Some individuals also choose to share personal experiences that help explain how they came up with their six-word phrases.

Samples currently on her website include: “We walked down the hallway together,” reflecting on a personal experience in the 1960s, and “She’s just not the right fit,” heard from a hiring manager. Another respondent put it more pointedly: “Race. A wall to hide behind.”

Through Oct. 4, Transylvania’s Black Student Alliance is inviting the campus community to participate in the Race Card Project. The students will then share some of the responses with Norris when she’s on campus.

According to Justin Bullock ‘15, president of the Black Student Alliance, the students’ goal is to encourage the campus community to take a few minutes and reflect seriously about how we as individuals have been affected by issues of race, as well as our role in promoting a constructive, honest conversation on the topic.