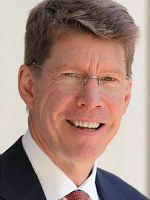 LEXINGTON, Ky.—R. Owen Williams will step down as president of Transylvania University after the 2013-14 academic year, Chairman of the Board of Trustees William T. Young Jr. announced this afternoon in a meeting with faculty and staff.

“The Board of Trustees fully supports Dr. Williams’s decision to continue to lead Transylvania University through the upcoming school year,” Young said. “It is with regret that we accept his resignation.”

Young said that a national search for Williams’s successor will be initiated later this year.

Williams came to Transylvania in August 2010, after a national search to find a successor for Charles L. Shearer, who had served as president for 27 years.

During his tenure, Williams has led the development of an ambitious strategic plan, Transylvania 2020—a comprehensive roadmap that encompasses enrollment growth, expansion of campus facilities and enhancements to academic and student life programs. He supported the development of an innovative August term for all new incoming students and expanded the size of campus by 20 percent.

Young also announced that Transylvania will hire an interim dean of the college to serve for the next two academic years, 2013-14 and 2014-15. A national search for a permanent dean of the college will be conducted after the new president is chosen.