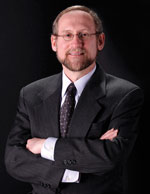 LEXINGTON, Ky.—American legal history and constitutional law expert Paul Finkelman will give the winter 2013 John Marshall Harlan Lecture at Transylvania University on March 5, at 7:30 p.m. in the William T. Young Campus Center. The lecture, “‘But I need Kentucky’: Lincoln, Emancipation, and the Importance of the Bluegrass State,” is free and open to the public. The campus center is located on the corner of Broadway and Fourth Street.

Finkelman is the President William McKinley Distinguished Professor of Law and Public Policy and Senior Fellow at the Government Center at Albany Law School in New York. He is the author of more than 150 scholarly articles and more than 30 books. His op-eds and shorter pieces have appeared in The New York Times, The Washington Post, USA Today and on the Huffington Post. He was recently named the ninth most cited legal historian in Brian Leieter’s Law School Rankings.

Finkelman is an expert in constitutional history and constitutional law, freedom of religion, the law of slavery, civil liberties, the American Civil War and legal issues surrounding baseball. He has written extensively on Thomas Jefferson and on Abraham Lincoln. He was the chief expert witness in the Alabama Ten Commandments monument case, and his scholarship on religious monuments in public spaces was cited by the U.S. Supreme Court in Van Orden v. Perry (2005). His scholarship on the Second Amendment has also been cited by the Supreme Court. In 2002 he was a key expert witness in the suit over who owned Barry Bonds’ 73rd home run ball.

C-SPAN was on the Albany Law School campus in 2010 to tape Finkelman’s two-hour class on the Dred Scott case. The program aired nationally and is now part of C-Span’s series on American history.  He has appeared on other C-Span programs, on PBS and the History Channel.

The John Marshall Harlan Lecture Series is made possible by the generosity of McBrayer, McGinnis, Leslie & Kirkland, PLLC.

John Marshall Harlan earned his law degree from Transylvania in 1852 and served as an associate justice on the U.S. Supreme Court from 1877-1911. He is highly regarded as an early champion of civil rights. Harlan was the lone dissenter in two important cases that were setbacks for the cause of civil rights: the Civil Rights Cases (1883), which struck down as unconstitutional federal anti-discrimination legislation, and Plessy v. Ferguson (1896), which upheld Southern segregation statutes.