LEXINGTON, Ky.—Charles L. Shearer, president emeritus of Transylvania University, was awarded an honorary Doctor of Letters degree at the December commencement ceremonies at the University of Kentucky for his lifetime service to higher education. Shearer was selected as president of Transylvania in 1983, beginning a distinguished 27-year tenure that is the longest in the university’s history. A native of Louisville, Shearer earned a bachelor of science degree in accounting and a master’s in diplomacy and international commerce, both from the University of Kentucky. He then earned a master’s and a Ph.D. in economics from Michigan State University.

Shearer was named to the presidency of Transylvania at the age of 40, after serving four years as the university’s vice president for finance. One of his first priorities was to increase enrollment, which stood at 655. By the next fall, the entering class had climbed 46 percent over the previous year, to 312, and overall enrollment climbed 19 percent to 785. By 2008, 1,153 students were enrolled, a 76 percent increase.

Academic quality of the faculty and student body was another priority. The number of students receiving prestigious William T. Young Scholarships, which cover full tuition and fees for four years, grew from 10 to 25, and the innovative Bingham Program for Excellence in Teaching provided financial rewards to high achieving professors.
Further bolstering the academic environment was the creation of two major endowed funds for faculty and student research, the David and Betty Jones Fund for Faculty Development and the Kenan Fund for Faculty and Student Enrichment. Working at the direction of the board, Shearer oversaw the completion of 13 new buildings, athletics fields and major renovations at a total cost of $53.5 million. 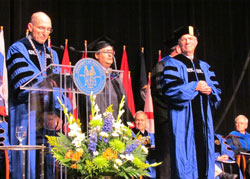 Also receiving an honorary degree at UK’s commencement was David L. Lollis, a 1959 graduate of Transylvania University who has worked for over 40 years in both the public and private sectors. Lollis is the past president of Appalbanc, an award-winning community development financial institution that promotes individual and community development in rural central Appalachia through the financial products developed by the Human/Economic Appalachian Development Corporation, the Federation of Appalachian Housing Enterprises, Inc. and the Appalachian Federal Credit Union. He is also past president of the Federation of Appalachian Housing Enterprises.