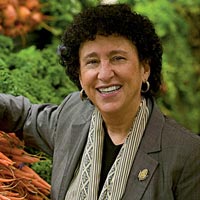 LEXINGTON, Ky.—Marion Nestle, one of the nation’s top experts on nutrition, will give the fall 2012 Kenan Lecture Tuesday, Oct. 23, at 7:30 p.m. in Haggin Auditorium in the Mitchell Fine Arts Center. The presentation, titled “Food Politics: How the Food Industry Influences Nutrition and Health,” is free and open to the public.

Nestle, a specialist in the politics of food and dietary choice, is the Paulette Goddard Professor of nutrition, food studies and public health at New York University, where she researches the connection between scientific and societal influences on dietary advice and practices.

Her book “Food Politics” has won awards from the Association of American Publishers, the James Beard Foundation and World Hunger Year, and “What to Eat” was named one of Amazon’s top 10 books of 2006 and called a “must read” by “Eating Well” magazine.

Nestle has a Ph.D. in molecular biology and an M.P.H. in public health nutrition, both from the University of California, Berkeley, where she received the 2011 National Public Health Hero award. In addition to her tenure at NYU, she is the visiting professor in the Cornell University Division of Nutritional Sciences.