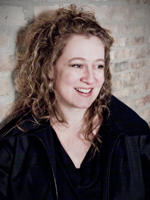 LEXINGTON, Ky.—Lexington’s own Liz Knowles, Celtic fiddler, will play at Transylvania University on Thursday, Sept. 20, at 7:30 p.m. in Haggin Auditorium in the Mitchell Fine Arts Center.

Knowles rose to popularity when she was fiddler for Riverdance and soloist on the soundtrack for the film Michael Collins. She is a respected musician, composer and teacher who has traveled the world, performing with renowned orchestras such as the Celtic Legends, New York Pops and Cincinnati Pops. In New York City she has performed at Carnegie Hall and on Broadway with fellow artists Marcus Roberts, the Bang-on-a-Can Orchestra, and Bobby McFerrin. She has also appeared in the Kennedy Center in Washington, D.C.

Knowles has also established herself as an admired teacher of Irish music. She has taught at the Swannanoa Gathering for their Celtic and Fiddle weeks, the Catskills Irish Art Week, and at many Irish piping festivals with her husband.

The event is sponsored by the Transylvania music department.