LEXINGTON, Ky.—Transylvania University student Don Combs won a gold medal this summer, but it’s not from the London Olympics. 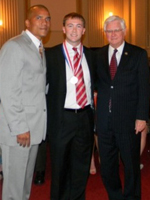 Combs was presented the prestigious Congressional Award Gold Medal by U.S. Rep. Harold “Hal” Rogers in recognition of his outstanding public service record and personal development achievements. A senior from Pikeville, Ky., he is the first to receive the award in the 5th Congressional District, which Rogers represents, and is one of only 177 gold medalists in the nation.

“I congratulate Don on this accomplishment,” Rogers said. “I’m thrilled to see young people taking initiative in their communities to lend a helping hand, advance their skill sets, strive for healthy living, and take on character-building projects.”

The congressional award is given to young Americans aged 14-23 and requires 400 hours of community service, 200 hours of both personal development and physical fitness activities, and a four-night expedition. Combs fulfilled the requirements through his positions as president of Kappa Alpha Order fraternity and southern regional chief for the Boy Scouts’ Order of the Arrow. His expedition consisted of a week-long canoe trip with the Boy Scouts.

With a full academic load, Combs traveled 103 days last year for the Boy Scouts, conducting leadership seminars and leading events. When he wasn’t hopping on a plane to mentor young men all around the country, he did the same in his own backyard. Under his leadership, Kappa Alpha Order organized the Transy 500 Race to support the Muscular Dystrophy Association. Combs achieved his physical fitness requirement by playing intramural sports and golfing.

“The experiences I have had because of this award are invaluable to me,” Combs said. And, he says that there’s always more work to be done. “It’s not a sprint, it’s a marathon.”

Combs’ commitment to service goes back to his adolescent and high school days. Before coming to Transylvania, he facilitated a $10,000 project, with the assistance of the Pike County Youth Leadership Council, to set up a recycling program with the Pike County schools. Recycling paper alone reduced the total waste in Pike County by 20 tons. For Combs, it’s “taking time out to make a difference” that keeps him going.

After receiving the Congressional Award Gold Medal, Combs interned at the head office of the organization in Washington, D.C. Upon graduation he hopes to earn an MBA and then go to law school. It’s not a specific career that Combs aspires for, but simply a platform that will enable him to take his service ethic to the next level. “Education, just like personal development, is never over. There’s always something more that you can do to give back or better yourself.”