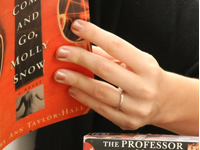 LEXINGTON, Ky.—Transylvania University first-year students are in their final week of the university’s inaugural, three-week August term that is designed to introduce them to the expectations of college work by reading and discussing two books.

The 350 students read Come and Go, Molly Snow, a novel by Kentuckian Mary Ann Taylor-Hall, over the summer. Once they arrived on campus Aug. 10, they began reading The Professor and the Madman, a non-fiction work by Simon Winchester that tells the story of two of the key figures in the making of the Oxford English Dictionary.

The books were chosen by a committee of faculty members who are teaching the three-week First Engagements course. They looked for books that they felt would foster a joy of reading while also providing a wide range of discussion topics.

Groups of about 16 students meet for three hours every weekday morning to discuss the books and related materials. “August term scholars”—Transylvania juniors and seniors who serve as mentors both in and out of class—assist the professors.

John Svarlien, classics professor and academic director of August term, says choosing these particular books was “a stroke of genius or very good luck” because they complement each other and carry out the theme of the term: Making Sense.

“Come and Go, Molly Snow helps students make sense on a personal level by raising issues related to an individual’s past, future and relationships,” he explains. “The Professor and the Madman helps them understand how language can be a tool to create meaning, and that scholarship is a collaborative effort.”

Professors supplement the book discussions with material from their own scholarship and expertise. For example, music professor Larry Barnes had his students listen to the haunting melody, “Sir Ulick Burke,” by fiddler Liz Knowles as they read chapter 18 of Come and Go, Molly Snow, where the main character walks to a lonely cabin and plays her fiddle to the “listening, empty air.” Barnes used his own composition, “Depression,” from the soundtrack of the movie Euphoria, to relate to the state of mind of a character in The Professor and the Madman.

During the second week, Come and Go, Molly Snow author Mary Ann Taylor-Hall gave a campus lecture, and students examined a bioethics issue in The Professor and the Madman during a presentation led by dean of the college and biology professor Kathleen Jagger, philosophy professor Jack Furlong, and August term scholars Emily Shepp, Ryan Smith, Sarah Czak, and Carrie Burt, who have studied in bioethics and biological research summer programs at Yale University and the University of Pennsylvania. This week, a coffeehouse session is scheduled on “What matters to me and why” by Eduardo Nino-Moreno, director of campus diversity and inclusion.

August term, with its close attention to reading, will be followed up in the fall term by First Engagements Seminar, which will include more writing assignments. During winter term, the first-year students will take a research seminar that requires in-depth investigation of a topic and writing a research-based argumentative essay.

“I feel significantly more prepared for my college career thanks to August term,” said first-year student Alice Boos of Wheeling, W. Va. “Being able to sit in a class with a real professor and then receive feedback gave me a better sense of my own preparedness for classes and gave me a better idea of what I need to improve on.”