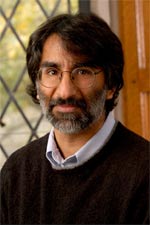 LEXINGTON, Ky.—Yale University law and political science professor Akhil Reed Amar, one of this era’s most accomplished constitutional law scholars, will deliver Transylvania’s John Marshall Harlan Lecture on Thursday, April 26, at 6:30 p.m. in Carrick Theater. The lecture is free and open to the public.

Amar was named one of the top 20 contemporary U.S. legal thinkers by a Legal Affairs readers’ poll and served as a consultant for the television show “The West Wing.”

“We are elated to have Akhil deliver our second John Marshall Harlan lecture,” said Transylvania President R. Owen Williams. “As one of the nation’s truly great constitutional law scholars, he is a perfect fit for this lecture series. In addition to being a prolific writer, he is a remarkably engaging speaker. We are fortunate to have him on campus, and we extend an invitation to our entire community to enjoy this wonderful event.”

The lecture series is named after U.S. Supreme Court Justice John Marshall Harlan, who graduated from Transylvania’s law department in 1852. It is made possible by a gift from the Lexington law firm McBrayer, McGinnis, Leslie & Kirkland, PLLC.