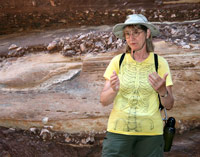 LEXINGTON, Ky.—Eugenie Scott, executive director of the National Center for Science Education (NCSE), will speak at Transylvania University on Wednesday, February 15, at 4:30 p.m. in the Mitchell Fine Arts Center’s Carrick Theater. “What Would Darwin Say to Today’s Creationists?” is free and open to the public and is scheduled near Darwin Day, which is internationally celebrated on or around February 12, the birthday anniversary of the evolutionary biologist Charles Darwin.

Scott, a former university professor, has been a researcher and activist in the creationism/evolution controversy for over 25 years. As a speaker, she addresses many components of this controversy, including educational, legal, scientific, religious and social issues. She has received national recognition for her NCSE activities, including awards from scientific societies, educational societies, skeptics groups and humanist groups. She holds a Ph.D. in physical anthropology from the University of Missouri and eight honorary degrees. She is the author of “Evolution vs Creationism” and co-editor, with Glenn Branch, of “Not in Our Classrooms: Why Intelligent Design Is Wrong for Our Schools.”

“Many elements of the modern American creationist movement would be familiar to Darwin, especially the argument from design, which of course was very well known and well-regarded by educated people of his time,” said Scott. “Young-Earth creationism, on the other hand, would be puzzling to him. Darwin might have heard of the ‘scriptural geologists’ who promoted a young-Earth view during the 19th century, but like other scientists of his time, he would have ignored them. The current creationist strategy of disclaiming evolution as weak science would have seemed more familiar to him, given the criticisms of evolution he encountered during his own time.”

Scott’s talk is part of the Creative Intelligence Lecture Series at Transylvania. For more information, contact the public relations office at (859) 233-8120.