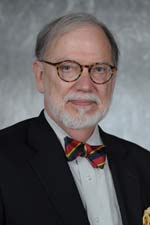 “Bill has been a valued colleague from the very beginning of my presidency,” Williams said. “While I will miss working with him as dean, I am delighted he will remain at Transylvania as a senior member of the faculty.”

Pollard’s areas of scholarship are English, medieval English literature and medieval theology. He has written numerous papers, essays and reviews while giving presentations at conferences in the U.S. and England.

“I have enjoyed my tenure as dean of the college and I am proud of all that has been achieved working in concert with faculty and staff,” Pollard said. “But I am excited about returning to the classroom and look forward to becoming a medievalist again.”

Pollard was the recipient of the 2010 Chief Academic Officer Award given by the Council of Independent Colleges (CIC). The award recognizes his contributions to colleagues at independent colleges and universities.

As a member of the CIC Chief Academic Officers Task Force (2006-09) he helped develop programs and chaired sessions at the annual institute for chief academic officers. For over 15 years he has been an evaluator for the Southern Association of Colleges and Schools’ Commission on Colleges. He is a member of Phi Kappa Phi and Omicron Delta Kappa national honorary societies, the American Conference of Academic Deans and has served as president and secretary of the Association of Chief Academic Officers of the Southern States.

Pollard, who came to Transylvania in 2004, has published on medieval English literature and is co-editor of “Mysticism and Spirituality in Medieval England” with Robert Boenig and “Vox Mystica: Essays on the English Mystical Tradition Honoring Valerie Lagorio” with Anne Bartlett, Thomas Bestul and Janet Goebel.

During Pollard’s sabbatical, he will work with late medieval English manuscripts.