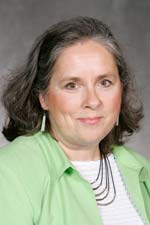 LEXINGTON, Ky.—President R. Owen Williams announced today that he has appointed Associate Vice President and Associate Dean of the College Kathleen Jagger interim vice president and dean of the college, effective August 1, 2012. William Pollard, who has held the position since 2004, will step down on July 31. He will remain professor of English.

“Kathleen is an exceptional individual on many levels, and I look forward to working with her on a broader spectrum of issues,” Williams said. “I am deeply grateful to her for agreeing to serve in this important capacity.”

Jagger joined the faculty in 2002 as professor of biology and is currently associate vice president and associate dean of the college.

“I am honored to have the opportunity to serve Transylvania in a new capacity and continue some of the initiatives Dean Pollard began such as increasing our interdisciplinary majors and minors, enriching the breadth of the curriculum with additions such as Chinese language study and developing the enhanced First Year Student Experience,” Jagger said. “It will be a marvelous opportunity to support our students, my colleagues on the faculty and the administration as we collaborate to move the college forward.”

Jagger’s major responsibilities have been in mentoring, advising, retention, diversity and coordinating academic support services. She implemented a first-year community book project, facilitated the formation of a first-year academic honorary and designed the QuickStart preorientation program. Jagger is vice chair of the university’s Quality Enhancement Plan Development Committee and serves on the President’s Advisory Committee. She chaired the search committee for the director of campus diversity and inclusion and served on the development team for Transylvania’s Center for Liberal Education.

Jagger holds a B.A. from DePauw University, an M.P.H. from Harvard School of Public Health and a Ph.D. from the University of Cincinnati College of Medicine. A recipient of Transylvania’s Bingham Award for Excellence in Teaching, she has mentored new faculty members and developed a number of new courses, laboratory projects and service learning travel courses.

Transylvania will begin a national search for a permanent vice president and dean of the college this fall, and the position is expected to be filled by the summer of 2013.