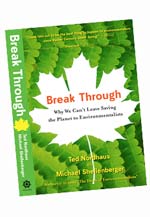 LEXINGTON, KY.—Ted Nordhaus, cofounder and chairman of the Breakthrough Institute, will give a talk titled “The Long Death of Environmentalism,” at Transylvania University on Wednesday, March 7, at 7:30 p.m. The lecture, in the Mitchell Fine Arts Center’s Haggin Auditorium, is free and open to the public.

“Break Through” was called “prescient” by Time and “the most important thing to happen to environmentalism since ‘Silent Spring’” by Wired. Nordhaus has been profiled in the New York Times, Wired, the National Review, The New Republic and on NPR. In 2007, he and Shellenberger received the Green Book Award and Time’s 2008 “Heroes of the Environment” award.