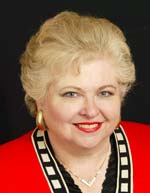 LEXINGTON, Ky.—Sarah Weddington, nationally known for her work on issues affecting women through her roles as an attorney, legislator, presidential assistant and professor, will speak at Transylvania on Tuesday, January 17, at 7:30 p.m. in the Mitchell Fine Arts Center’s Carrick Theater.  Her talk, “Some Leaders are Born Women!” is free and open to the public.

In 1973, Weddington successfully argued the winning side of the landmark Roe v. Wade case before the U.S. Supreme Court.  A long-time advocate for women, she was the first woman elected from Austin to be a member of the 150-member Texas House of Representatives, where she served three terms before going to Washington, DC, as general counsel of the U.S. Department of Agriculture in 1977, the first woman to ever hold that position.

From 1978 to 1981, she served as an assistant to President Jimmy Carter and led White House efforts to extend the time for ratification of the Equal Rights Amendment (ERA), assisted in the selection of women for federal judiciary appointments, co-chaired the U.S. Delegation to the United Nations Mid-Decade Conference on Women in Copenhagen and implemented other programs to assist the equal treatment of women in the military.

She later became the first female director of the Texas Office of State-Federal Relations in Washington, DC.

Weddington currently practices law in Austin, and is an adjunct professor at The University of Texas in Austin, where she helped shape a new generation of leaders in her classes “Gender-Based Discrimination” and “Leadership in America.”  She is the author of the bestseller, “A Question of Choice,” a memoir of her experience arguing the Roe v. Wade case. She is believed to be the youngest person ever to win a case before the US Supreme Court. A founding member of the Foundation for Women’s Resources, she has been integral in all its activities, including the “Leadership Texas” and “Leadership America” programs and the creation of The Women’s Museum, which opened September 29, 2000, in Dallas, Texas.

In 1990, the National Association for Campus Activities named her “Best College Lecturer,” and in 1980, she received the Planned Parenthood Federation of America’s Margaret Sanger Award, its highest honor. Time named her one of the “Outstanding Young American Leaders.” Ladies Home Journal presented her with its Woman of the Future award. She was selected as one of the ten “Outstanding Women in America.” Esquire recognized her in 1984 as an “American Under 40 Making Things Happen.” She has been featured in Working Women, People and the Washington Post, and has been a guest on “The Today Show,” “Good Morning America,” “CBS Morning News” and CNN.