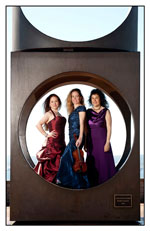 LEXINGTON, Ky.—Seattle-based touring ensemble TangleTown Trio will give a performance at Transylvania University on Tuesday, September 13 at 7:30 p.m. in Carrick Theater. The show, “Song Nouveau,” is free and open to the public.

The trio, comprised of violinist Jo Nardolillo, pianist Judith Cohen and soprano-composer Sarah Mattox, is dedicated to living American composers and the idea that there should be no barriers between art, music and the audience. Their program will include contemporary art songs in an accessible style, many of them composed by Mattox, as well as pieces composed by Mark Olivieri and Aaron Copeland.

“Song Nouveau” literally means “New Song,” and most of the concert will feature new works by Mattox and Olivieri. The title also refers to the Art Nouveau movement that flourished at the turn of the 20th century, spanning architecture, sculpture, furniture and almost all visual arts. It incorporated elements of nature and emphasized bringing art into everyday life. “Song Nouveau” strives to combine these same elements, programming songs of nature and life, which are immediately accessible to the audience.