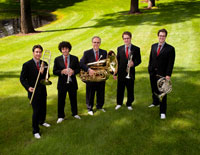 With a discography of over 90 albums and an extensive worldwide touring schedule, Canadian Brass is a pioneer in bringing brass music to audiences everywhere. Members of the famed quintet are renowned for their dazzling virtuosity and freewheeling performance style. The group helped to transform a previously undervalued group of instruments with a limited repertoire into a versatile ensemble proficient in everything including renaissance and baroque masters, classical works, marches, holiday favorites, ragtime, Dixieland, jazz, big band, Broadway and Christian music, as well as popular songs and standards. They are especially known for their Christmas concerts and for helping reestablish Scott Joplin with modern audiences through their research, arrangements, and recordings of his rags and other works.

Canadian Brass was the first brass group from the west to play in China and the first to take the stage in Carnegie Hall. They have performed in Australia, the Middle East, the former Soviet Union and South America. They have appeared on “The Tonight Show,” “Today,” “Entertainment Tonight,” “Sesame Street” and numerous PBS programs.

Members of the famed quintet are Chuck Daellenbach (tuba), Christopher Coletti and Brandon Ridenour (trumpets), Achilles Liarmakopoulos (trombone) and Eric Reed (horn).  In addition to the performance, the group’s members will present a workshop for Transylvania students.