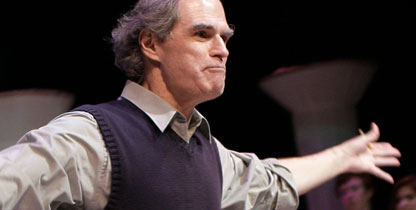 LEXINGTON, Ky.—Transylvania President Charles L. Shearer has announced that drama professor Tim Soulis is the recipient of the Lucille C. Little Endowed Chair in Theater. The endowed chair was created with a challenge grant of $500,000 from the W. Paul and Lucille Caudill Little Foundation and is the first endowed chair at Transylvania.

“We are extremely grateful to the Little Foundation for its generous support of the arts at Transylvania and I am delighted that Professor Soulis is the recipient,” said Shearer. “Tim’s dedication and commitment to our theater program is tremendous.”

Soulis taught courses in drama and performance throughout the country and directed more than 70 productions before coming to Transylvania in 1994 as a Bingham Fellow.

“The main purpose of Transylvania’s theater program is to develop in student actors, technicians, directors and playwrights the vocal and physical skills and intellectual and emotional maturity to explore drama as an important form of artistic and personal expression and fulfillment,” Soulis said. “This is in harmony with the University’s goals as a liberal arts institution to broaden student’s intellectual and creative abilities.”

These goals will be enhanced by the endowed chair, which will allow operating funds to be redirected to new initiatives, which may include employing guest artists to direct theater productions; arranging trips to New York City for drama majors and minors to attend plays and musicals; organizing workshops featuring visiting actors, directors, playwrights, and designers; and augmenting funds for drama faculty travel, enrichment and professional development.

By providing the challenge grant for this endowed chair, the Little Foundation is following Mrs. Little’s desire to enhance all aspects of theater instruction,” said Shearer.

The late Mrs. Little, a 1928 graduate of Transylvania and a member of Transylvania’s Board of Trustees, was known in central Kentucky as an avid patron and supporter of the arts. Transy’s theater, dedicated in 1999, is named for Little, who provided the lead gift for the project.

Tim Soulis has put his own unique stamp on Transylvania theater, staging one of the most elaborate and acclaimed musicals in the school’s history – Fiddler on the Roof – while directing skillfully crafted versions of classics like Death of a Salesman, Oedipus the King, King Lear and The Miracle Worker, along with lesser-known but very engaging plays such as The Government Inspector.

He challenges himself to grow as a director, taking risky and rarely performed plays (such as Vaclav Havel’s The Increased Difficulty of Concentration) and selecting innovative production concepts (such as a production of Hamlet with two separate casts, one all male and one all female) to make sure he doesn’t use the same directing style or genre for every play.

“One of the neat things about doing theater in an academic situation is that you can test out some theories that you’ve read about or contemplated and see if it works or not, much like a scientist in a lab,” Soulis said.

The idea for his approach for having two separate casts for Hamlet was inspired by an all-female production of Richard III that Soulis had seen at the Globe Theater in London.

While the demands of mounting two performances simultaneously were sometime exhausting, Soulis says he was pleased with the decision.

“It was so heartwarming for me to make others aware that there are no limits in drama, aside from creating something of beauty, order and meaning,” he said. “The thrill of seeing that awareness and enlightenment come from both casts was really quite provocative and meaningful.

“It convinced me that Shakespeare’s characters transcend the limits of gender, race and ethnicity. They are archetypes played by humans, but the power of the poetry, and the power of the characters and the situations go far beyond the kind of ephemeral, moment-to-moment life that we live every day to take on far greater meaning.

From Soulis’s point of view, the fact that his arrival on campus roughly coincided with a $1 million gift from Lucille Caudill Little ’28, a Transylvania trustee and patron of the arts, for the fundraising of a new theater could not have been a happier circumstance. Since completion of the state-of-the-art Lucille C. Little Theater in 1999, the drama program has embraced its new home with fervor. The facility’s flexible seating and high-tech sound and lighting systems are a dream come true for Soulis.

“It’s rare to have the opportunity to help design a new theater,” said Soulis. “We wanted to design a kind of space we didn’t already have. The primary benefit of this space is its flexibility. It can be arranged for proscenium, arena, thrust, or an environmental staging with no clearly defined acting areas. Every time I go in there I find new possibilities.”

Soulis has used Little Theater for most of the productions, primarily because he feels a smaller, more intimate experience fits the role of the collegiate theater as opposed to commercial theater.

Soulis has been involved with the Governor’s School for the Arts as chair of the drama program since 2001. He has traveled across the state auditioning students, teaching audition workshops and meeting with theater colleagues.

Each December, Soulis gives the community the opportunity to join Bob Cratchit, Tiny Tim, the ghosts of Christmas Past, Present and Yet-to-Come and old Scrooge himself in his solo performance of Charles Dickens’ A Christmas Carol. The one-hour production is free with donations taken at the door to benefit the Bluegrass Rape Crisis Center.