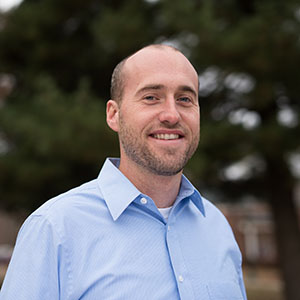 Stephen Johnson is in an ideal position to teach physics at Transylvania. A 2004 graduate, Johnson went on to earn a Ph.D., and then worked in the private sector in nanotechnology for five years before returning to his alma mater and teaming up with his former professor Jamie Day.

He knows the power of the professor-student relationship at Transy, and he has the experience in the field to take what he’s learned and bring it into the classroom and laboratory through his research with solar technology.

Johnson is building a photothermal spectroscopy apparatus to analyze materials that can be used in solar cells. Most consumer solar cells today use silicon, an inorganic material that is inexpensive to manufacture but is not particularly efficient in converting solar energy to electricity. Johnson is studying organic materials that could be manufactured at a lower cost.

“I have seniors doing research, and together we’ve designed and ordered high-tech spectroscopy equipment that they’re putting together and are going to be testing throughout the semester,” he says.

Once the apparatus is up and running, Johnson and his students plan to collaborate with chemistry and engineering professors at the University of Kentucky who are making materials that can be tested on Transy’s campus. It’s a level of undergraduate research that many physics students can’t get at larger institutions.

“That’s one of the most important aspects of this program—the hands-on interaction and availability of the professors,” he says. “We do that particularly well at Transylvania, and I am excited to be back and on the mentoring side of the relationship now. I try to foster that exact same type of interaction with the students so that we have a good working relationship, and they have the opportunity to learn physics through doing real research.”