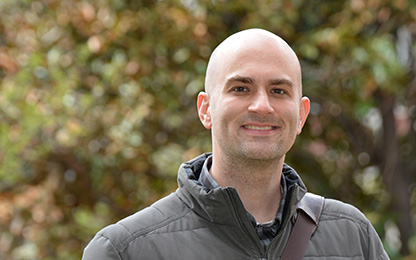 Steve Hess understands that sitting on the sidelines is a great disadvantage when it comes to gaining the skills necessary to succeed in political science. Being an active participant in learning and being involved in the community are crucial for gaining a holistic worldview that can propel students to fulfilling lives and careers.

“I emphasize student-centered, active learning in the classroom,” Hess says. “My courses make frequent use of activities and assignments such as debates, simulations and role plays that put students in the center of the action and require that they critically engage and apply course concepts by acting as political thinkers and decision-makers.”

It’s a philosophy that’s carried over into his second role on campus, as the coordinator of Transylvania’s Peace Corps Prep program, a co-curricular partnership that trains Transy students for post-graduate service in the Peace Corps as well as careers in international development. Participants engage in coursework, community service and leadership training that earn them a certificate of completion and special consideration for acceptance should they choose to apply to the Peace Corps.

“It provides both practical experience, in which students develop hands-on skills and competencies that can be translated into Peace Corps service, and cultivates an ethic of service that stands at the center of the Peace Corps’ mission,” Hess says.

Active learning and meaningful mentorship relationships are at the core of what Transylvania’s liberal arts education is all about, and political science is a perfect encapsulation of that identity.

“Political science is very much about citizenship — how people can better understand and critically examine political phenomena for the sake of being active and informed participants in the political system,” Hess says. “A liberal arts education serves these concerns by encouraging students to consider different perspectives, appreciate the importance of context, practice empathy and develop into whole, well-rounded persons.”