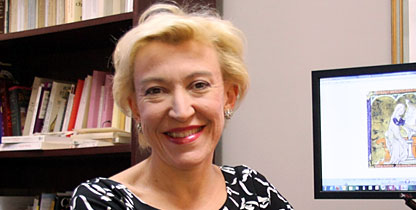 It’s hard to imagine Simonetta Cochis on stage engaging in the sometimes boisterous, physical comedy of farce. She exudes a natural elegance and refinement.

Yet, since 1995, she has both directed and acted in farces around the world as part of a troupe of scholars and teachers formerly called French Farce in Action and now reconfigured as La Compagnie Gaillarde. She also finds performing farces and narratives is an effective tool for teaching students about French literature.

“I use performance to inform teaching, to get students to come out of their shells, to hear their own voices and be comfortable with those voices. That’s been extremely rewarding.”

Transylvania’s unique community allows us to nurture students as they progress from beginning to advanced language studies. Starting in French 1 there are students who barely know how to say ‘bonjour.’ Then I have them in senior seminar and they’re writing about Sartre and Camus and Derrida in very high level French. We are able to bring students a long way in a short amount of time.

And her students seem to like it, too. According to their course evaluations, performing in farces was their favorite part of the class.

Cochis points out that there is also a pedagogical side to these performances.

“In the Middle Ages these pieces were not read in silence; they were shared by a group of people. There was a central storyteller who worked with the audience to bring these old stories to life.

“How can I use performance practice—the preparation of the actor and performance theory—to examine these narratives? How do the methodologies of performance inform the literary analyses of these pieces?”

Cochis is also interested in medieval manuscripts, which eventually provided a more concrete form for these traditionally oral stories. She believes you can learn a lot by looking at the different manifestations of a manuscript, by considering the details of its production, as well as its reception by the intended audience.

Is the pagination purposeful? Is there significance in the placement of images next to text? What do the various revisions tell us about the author’s intentions?

Cochis sees these manuscripts as “yet one more form of ‘performance’ of a work, a page-bound interpretation revealing the tastes and values of the society in which the book was produced, adding depth and context to a text.”

Aside from her “bookish detective work,” Cochis is interested in introducing aspects of nature into her courses. She has taught a special topics course that addresses how French literary texts of the past and the present reflect the French relationship to nature and the environment, and how French society today articulates issues of sustainability in its public discourses. She would like to develop a class comparing what Lexington and its sister city Deauville, France, are doing in the areas of sustainability. She also has a plot in Transylvania’s community garden, where her students have planted a medieval herb and flower garden.

The opportunity to work on these types of projects with her students—both students in her first-year seminar and French students—as well as interact with her colleagues in new and creative ways is what makes Transylvania so appealing to her.

“There’s a nice balance between teaching and scholarly work and service to the campus. That’s the kind of position I always dreamed of, and I have it.”

“Integrating Performance Practice and Theory in the Teaching of Medieval Theater,” co-authored with Dr. Yvonne LeBlanc and Dr. Mark Cruse, The 43rd International Congress on Medieval Studies, Kalamazoo, Mich., May 2007