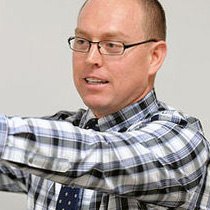 Ryan Stuffelbeam has an uncanny interest in fractions—particularly “weird fractions.”

“Weird fractions are fractions that enjoy a ‘correct’ invalid reduction,” explains the assistant professor of mathematics. “For instance, students often want to (incorrectly) reduce a fraction by canceling ‘like’ digits in the numerator and denominator. When such a cancellation is made in a weird fraction, the resulting fraction remains equal to the original.”

Stuffelbeam’s interests are far from one-dimensional, however. He conducts research on number theory, representation theory, and transcendental numbers. He’s also presented to the Mathematical Association of America on incorporating writing into the undergraduate math curriculum.

“Critical reasoning and effective communication skills are hallmarks of Transylvania’s liberal arts curriculum,” he says. “Through the process of writing proofs and constructing counter-examples, math students routinely use these intellectual traits.

“Mathematics does not exist in a vacuum,” Stuffelbeam concludes. “The breadth of knowledge acquired through a liberal arts education allows students to place the big ideas and events of math into context.”

“How Weird are Weird Fractions?” (under peer review)