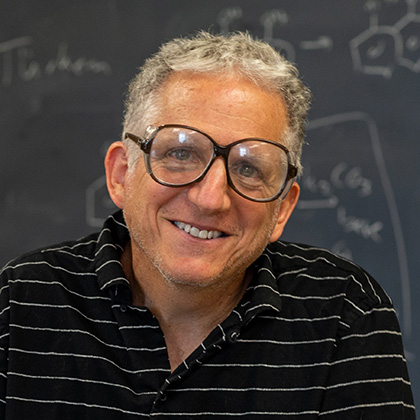 Chemistry teachers wrestle with how to keep their students engaged in a subject requiring intense concentration. Bob Rosenberg has found a way to use an unexpected tactic—humor—to accomplish that task.

He loves spontaneity, whether it’s a fire alarm going off during class or a funny story thrown, without warning, into the middle of a lecture.

“After about 15 to 20 minutes, if it looks like their eyes are glazed over, I’ll talk about something else,” he explains. “Like, ‘I was walking to school the other day, and this guy just cut me off. And it was so rude—do you guys drive like this?’ And I’ll riff on that for 30 seconds or a minute, and then I’ll go back. For them it’s a surprise, and for me it’s calculated.”

Rosenberg, who is a fan of comedians Jon Stewart, Jerry Seinfeld, and Woody Allen, says students often respond to that element of surprise and are more likely to stay with him during his classes.

“I see myself on stage in class. It’s easy to do. When an audience expects you to be funny, that’s very hard. If they expect you to teach chemistry, the bar is not very high for being funny. Whether I’m funny or they’re laughing at me is irrelevant. I win in both cases because they’re relaxing a little bit, and they can get their brain out of anxiety mode into learning mode.”

Rosenberg specializes in mechanistic organic chemistry and is currently studying carbon fluorine bonds. He introduces fluorine, which is not a naturally occurring organic element, into molecules and sees what those molecules do. His students help with the research, which allows students to succeed or fail in a real lab situation.

“There’s so much up and down time in the lab—it’s like starting your car on a cold winter day. When you’re young, there’s a lot of waiting. As you mature, there’s less of it. I have to decide: I can either tell them how to be efficient, or I can let them be inefficient and thereby learn on their own. It’s typically a mix of the two. That’s the tension in teaching.”

In his spare time, Rosenberg is an avid squash player, and he can routinely be seen winning game after game against students in the William T. Young Campus Center.

“Felkin–Anh is not enough,” with Jonathan Kelly, Journal of Physical Organic Chemistry, January 2015

“Does fluoromethane form a hydrogen bond with water,” The Journal of Physical Chemistry A, 2012