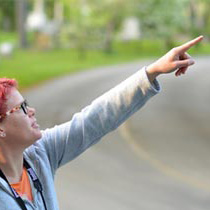 Biology professor Becky Fox won’t be offended if you call her a bird brain.

Fox usually has at least one Transylvania student working with her. “They help with all aspects of my research, including trapping and caring for birds, collecting behavioral data, and running hormone assays.”

Fox and her students have researched the relationship among behavioral traits, hormone levels, and “badges of status” in house sparrows. Another project examined how seasonal changes in hormone levels may relate to personality traits in birds.

Some of Fox’s students choose to pursue independent research projects under her guidance. For example, two of them looked at the effect of short-term exposure to ultraviolet radiation on stress hormone levels and metabolic rates in bullfrog tadpoles.

“I think students learn best when they’re engaged with the course material and have a chance to take ownership of it,” says Fox. “That’s why I bring current research into my lectures and require students to interact with the primary literature. It’s also why most of my courses include a substantial hands-on component, such as learning about mist netting, transect counting, and other field techniques in an ornithology class.”

Fox points out that every Transylvania biology class includes a laboratory component, which isn’t the case at many universities. “Most students won’t learn cell culture techniques until graduate school, but cell culture is a major component of our sophomore-level cell biology course.”

The broad knowledge that Transylvania students gain in the liberal arts also gives them an upper hand, according to Fox. “Transylvania teaches students to think creatively and to critically evaluate information and arguments,” she says. “I love having the chance to form close relationships with my students and watch them grow over their time at Transylvania.”

Fox, R.A. , Millam, J.R. “The use of ratings and direct behavioral observation to measure temperament traits in cockatiels.” Ethology, 2010.