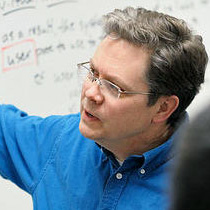 We live in an ever-changing world, and it’s frequently hard to keep up. So just imagine the rapid-fire environment of computer science, where yesterday’s innovations can become obsolete today.

“A large part of a computer science professor’s job consists of sifting through the overwhelming amount of new knowledge constantly being generated,” Robert England said.

Passing on that knowledge to students is the other part of the challenge. “A computer science student can only truly learn by doing, and the professor’s role is one of an enabler and a guide—not a walking encyclopedia of technical ephemera or computer language syntax.”

England’s areas of interest range from Apple software development—including apps for mobile computing devices such as the iPhone and the iPad—to computer music algorithms. He has witnessed the changes in computer programming over the last 20 years and appreciates how they have affected what computer science professionals need to know.

“Mobile device users have such high expectations for a professional look and feel, and the software to accommodate these expectations is so complex, that programmers can no longer hope to achieve satisfactory results by developing software from the ground up.

“Developers must now rely on libraries of prepackaged code modules. Rather than focusing on learning how to write their own computer code, the emphasis for developers is now shifting toward learning what modules are available to them and how to use and combine these modules to construct apps that meet the increasingly high standards of increasingly discerning users.”

Since many of us now walk around with computers in our hands, we understand how computing has permeated nearly every area of our lives. According to England, computer science has become a subject that integrates easily into other liberal arts studies.

“All disciplines now use computing to some degree as a matter of course. Works of art and musical compositions are created with computers. Many of the gains in modern science would not have been possible without computers. Computing applications abound in business, the humanities, and the social sciences. Familiarity with a variety of disciplines enables a computer science student to pursue his/her specific interests—even in areas not traditionally considered to be computer related.”

At Transylvania, students taking computer science classes have the advantage of working closely with their professors—professors who believe it’s their job to stay on top of the ever-changing field.

“Students receive a high degree of individual attention and have far greater access to their professors than they would at most schools. Our computer science faculty stay current in our discipline, and we work hard at rapidly developing new state-of-the-art courses in emerging areas such as artificial intelligence and programming mobile devices. Such newer courses rarely appear so quickly in schools as small as Transylvania.”

Worked in Bergen, Norway, as a research computer scientist at the Christian Michelsen Institute and became a fan of Scandinavian design; now owns several chairs designed by Peter Opsvik for the Stokke furniture company.

Rescued a one-day-old orphaned dog, which he hand fed with a baby-doll bottle for weeks. Buddha now romps regularly at the neighborhood dog park. “I am the only parent he has ever known.”

A Software Development Course Featuring iPad App Construction, Journal of Computing Sciences in Colleges, Vol.27:5, May 2012, and online at The ACM Digital Library.

The PNTFS File System in the Moses2 Operating System Environment Simulator, Journal of Computing Sciences in Colleges, Vol.25:5, May 2010, and online at The ACM Digital Library.

Teaching Principles of Shared Resource Management with the Moses2 Microcomputer Operating System Environment, Journal of Computing Sciences in Colleges, Vol.21:5, May 2006, and online at The ACM Digital Library.