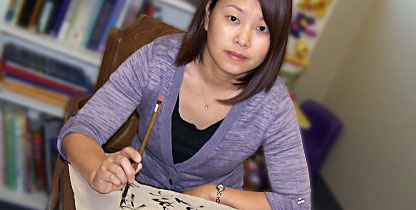 Learning a language is only a competition with oneself. When you learn it, imagine what you want to do with it.

When Qian Gao asked one of her students at the University of Oregon why he wanted to study Chinese—a question she always asks her new students—he replied, “Because Chinese just doesn’t make any sense to me!”

Gao thought that was a terrific answer. As she explains, not everyone confronted with a difficult task—such as trying to decipher something that seems inherently unknowable or mysterious—will find the motivation or the discipline to tackle it. “It is this precious tickling curiosity that motivates one to learn.”

And where is that student today? After majoring in Chinese in college, he is now working at the U.S. Embassy in China.

Gao quotes Chinese philosopher Mencius who said that one of a gentleman’s three joys is “to have fine youths as students to teach and nurture.” The students at Transylvania are certainly a joy for Gao. Her teaching is “student-centered, proficiency-oriented, context-based, and technology-assisted.” In other words, Gao wants her students to practice using their language skills in real-life situations where they have to rely on their language proficiency to deal with whatever circumstances arise.

Gao also believes that “languages are deeply rooted in cultural practices.” Students learning a language naturally learn about the cultural and historic backdrop that helped mold that language. Likewise, engaging in common cultural practices makes it easy to learn words and phrases associated with specific social conventions. And it’s fun.

“Learning a language is not about passing the many dictations, quizzes, and exams. It is not about receiving a good grade, or fulfilling a requirement.”

Instead, Gao wants her students to imagine they are in China, and they must rely on their language skills to connect with the people they meet and make new friends. Developing proficiency helps them “open up so many windows and doors and immerse themselves in an amazing culture.”

When a student can do that, the learning is just beginning.

Modern and contemporary Chinese literature and film with a focus on history, memory, and modernity
Popular culture in contemporary China
Cultural studies in the Chinese context
Chinese language pedagogy

“Hidden In the Heat of the Sun: Mimesis, Sacrilege and Aporia—Reading Jiang Wen’s Filmic Re-creation of the Cultural Revolution” in Virginia Review of Asian Studies, 2010, 84–97.

Chinese language and culture instructor for 17 years, both in China and in the U.S.
Instructor for the University of Oregon Chinese Flagship program—the first national Chinese immersion program at college level—sponsored by the U.S. Department of Defense, 2006–07
Researcher and editor for the first National Online Early Language Learning and Assessment (NOELLA) project, 2007