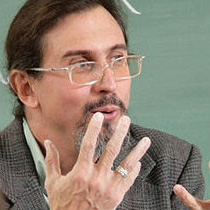 Peter S. Fosl is a past winner of the Acorn Award as Kentucky’s outstanding professor. As a teacher, he strives to make sure students are involved in the class.

Teaching is to some extent creating lovers. The word philosophy means love of wisdom. So there’s a kind of love of learning and inquiry and reflection that I try to ignite in students.

“I’ve found that teaching is not just about conveying a body of information, but it’s cultivating certain passions and sentiments in the students, so that students find the material interesting, important, and something they can invest their own passions in,” he says. “One thing that is delightful and very satisfying to me is to see that passion for learning take root in students.”

Fosl’s two-year Bingham-Young Professorship on Liberty, Security, and Justice brought prominent guest speakers who focused the Transylvania community on heightened issues of liberty, security, and justice in the era following the September 11, 2001, terrorist attacks on the United States.

“I’ve devoted a great deal of my professional energy to coming to terms with the history of western philosophy,” Fosl says. “I think understanding where we’ve been, how we got where we are, and perhaps what we’ve mistakenly left behind is essential to a strong education and a life of reflection.”