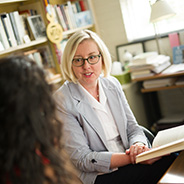 One of Melissa McEuen’s most popular courses is Shooting America: Photography, 1860-1960. That’s perhaps not a surprising choice for young adults who have come of age in a culture where cameras and photos are ubiquitous and the power of those images to affect people’s lives is sometimes underestimated.

McEuen, of course, wants her students to consider photography’s role in affecting the course of history, or chronicling it.

“Whether the subjects in the photographs are Dust Bowl refugees, North American Indians, Appalachian mountaineers, or Japanese-American internees, we must ask not just about their lives and experiences, but also:  Who created these images, and what did they want their viewers to see? What happens when someone points a camera and shoots? What are the ripple effects in the days, months, and decades afterward? What power does one wield with a camera in hand?”

Examining how photos were composed or chosen for publication can help historians understand political or social agendas. Or, photos can simply be a window into the culture of the time: modes of dress, home life, work environments, celebrations…or the horrors of war.

McEuen knows that studying history is not always pretty, but she doesn’t shy away from what one historian has called “the blood in the archives.” Her goal is to “challenge students to confront it with open eyes to foster respect and compassion for others, both the living and the dead.”

It’s all part of searching for meaning in the past. “I encourage students to revisit again and again certain historical personalities, political decisions, and catastrophic events in order to understand their own shifting impressions of the past.”

McEuen uses frequent writing assignments to help students sift through their reactions to historical events. “Since writing clarifies and shapes thinking, students in my classes write a great deal and in assorted forms—letters to the editor, book reviews, newspaper reports, primary source dissections, and historical arguments based on their own discoveries.”

And McEuen lets her students know that she, too, has suffered the deflation of seeing those scarlet letters on a piece of writing she has submitted for review. She likes to share comments she has received “so students will know that others are marking my papers just as I mark theirs.” An award-winning author, McEuen realizes it can be “tough to read even the most constructive criticism.”

Occasionally, even historians are rendered speechless by the raw reality unfolding around them. McEuen vividly remembers one such moment.

“On September 12, 2001, I entered a silent classroom only to have a first-year student timidly ask, ‘Can you explain to us what happened yesterday?’ Her face remains clearly etched in my memory and still gives me chills, in part because I recall how overwhelmed and unqualified I felt broaching the question. In a moment, though, I realized that my job wasn’t to answer the question but to create a place where thoughtful discussion could begin.”

Women in the United States, 1900-1950
Photography and other visual representation
Gender, race, class and cultural studies
The modern American South

“Exposing Anger and Discontent: Esther Bubley’s Portrait of the Upper South during World War II,” in Searching for Their Places: Women in the South Across Four Centuries, ed. Thomas H. Appleton, Jr., and Angela Boswell (Columbia and London: University