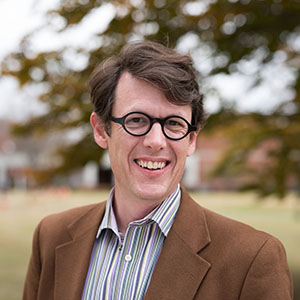 As a social psychologist, Mark Jackson has investigated a lot of emotions familiar to all of us: shame, humiliation, envy, disgust, and  schadenfreude, or enjoyment derived from the troubles of others.

Not long ago Jackson was teaching a Psychology of Women class when two students noted a reference to a study in one of their textbooks that they found suspicious. The study concerned disgust responses to menstrual blood. The students checked the source and were concerned that the author may have drawn conclusions from the study that weren’t warranted. When they approached Jackson, he said, “Well, then, let’s test it right.”

Working with Jackson, the students came up with their own controlled testing process. Their findings were consistent with the students’ expectations and contrary to what was suggested in their textbook.

What they found was that there is no unique disgust response for menstrual blood—any blood invokes the same reaction from most people. (There are, however, cultural factors that still influence reaction to menstruation in general.) They compiled their findings and were invited to present a poster of their results at the 49th annual meeting of the Society for the Scientific Study of Sexuality in Las Vegas.

That is exactly the sort of “exchange of scholarship” that makes Jackson appreciate teaching at a small liberal arts college.

“I have my own interests and research I want to do, and students have their own interests, which may be sparked by something they learn in class. Many of the projects I have done since coming to Transylvania have emerged through collaboration with students. They come with ideas and I shape them with mine and we work out something that we can do together. This kind of collaboration has taken my personal scholarship in directions I never would have expected. I love that about this place.”

As Jackson prepares for a sabbatical in 2013, he intends to incorporate one of his personal passions into his research: running. He’ll participate in seven marathons, where he hopes to talk to runners about why they run. Is it for fitness? Is it a social outlet? Are they running from something? He will encourage runners to log on to his website and respond to periodic surveys he will launch to gather data.

“We’ve all heard stories about how professional athletes like Michael Jordan, Tiger Woods, and Wayne Gretzky turn everything into a competition, and how much they hate to lose. But there hasn’t been much research done to see if that’s the case.

“More importantly, though, in the process of answering this particular question I want to create a database of subjects for future research I’ll conduct with interested students. Being able to reach out to a few thousand runners and ask them all the same question is a really cool prospect.”