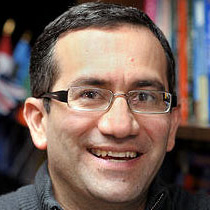 “Critical thinking breaks down barriers and liberates the individual from conventional thinking.”

Socrates once noted that, “The life which is unexamined is not worth living.” Michael Cairo aims to engage students in politics and political science, but also to ask them to critically examine the major questions of human interaction — like, are humans generally cooperative or self-interested? What is the basis of an ideal political community? These are questions that he says are at the core of political science and liberal arts education.

“These questions engage students in a wider discussion about what it means to be human, and whether humans are free to act within the international system,” he says. “I believe that college-level teaching involves more than delivering information and ‘covering’ the material on the syllabus. Underneath these practical concerns lie more important goals — building the soul of a person, promoting human development and advancing moral progress.”

Cairo clearly practices what he preaches. Because he is enthusiastic about learning himself, he believes his students are likewise enthusiastic learners. In fact, engaging students in important research topics beyond classroom walls is what Cairo enjoys most about teaching.

“As a professor, I envision my role as a guide, helping students broaden their intellectual lenses,” he says. “In doing so, I hope to have a lasting impact on the way they think about issues and how they approach the world. After one of my courses, I hope that students find that they have gained the necessary tools for critical analysis of the political world. Most importantly, I hope that my courses help students make informed choices about their lives and encourage active citizenship.

That philosophy fits well in Transylvania’s political science program, which Cairo says is well positioned to offer students key opportunities. The liberal arts foundation expands students’ understanding of the world. Its dynamic study abroad program and unique May term give them the chance to participate in international politics. And Transy’s location in Lexington opens lots of doors for those interested in government or law.

In addition to his work with students, Cairo is a prolific political science writer. John Robert Greene of Cazenovia College called his book “The Gulf: The Bush Presidencies,” “a thoughtful, critical, impeccably researched, and engagingly written study of the foreign policy of the TWO Bushes. In this first joint-study of Bush 41 and Bush 43, Cairo deftly uses both a wide selection of the available literature as well as newly opened material from the Bush papers, to show how these two men defined the policy of a generation.”

Cairo has been a guest on numerous radio and television programs as a panelist or political affairs expert, including the following:

The Gulf: The Bush Presidencies and the Middle East. University Press of Kentucky Series in Conflict, Diplomacy, and Peace, 2012.