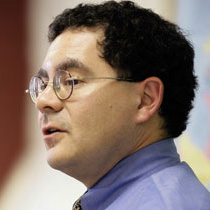 Ken Slepyan wants his students to become historians, not just experts on the most prominent names and dates of history. He believes that will make them more self-aware and better contributors to society.

For Slepyan, becoming a historian starts with empathy. “Good historians can put themselves in other people’s shoes,” he says.

But as a historian of World War II, he knows how difficult that can be. “I have to be able to see through the eyes of the Nazi leadership. I need to be able to figure out how Stalin would see the war. That’s not easy.

“Seeing through multiple perspectives is important not because one agrees or sympathizes with these positions but because without it, it is very difficult to understand historical protagonists and the reasons why they did what they did. I emphasize to students that understanding is not the same as justifying.”

This ability to see multiple perspectives is a skill that all students—and all citizens—need to develop, regardless of their major or their ultimate profession.

“In the real world, it’s critical to see different points of view. Not to agree with them or to justify them, but to see from other people’s perspectives so we can collaborate and solve problems.”

Historians also need to be able to evaluate and judge what makes credible evidence. To teach that skill, Slepyan directs his students’ attention inward, to understand who they are.

“Historians must be reflective about who they are in the world and how that shapes how they see history,” Slepyan says. So he asks his historians-in-training, “Are you interpreting evidence in a particular way because of a certain social, racial, gender, or religious background?”

Slepyan argues that a historian’s ability to evaluate evidence directly correlates with how history is documented.

“Evidence usually comes from written sources. In the course of history only a select group could write, narrowing the information we have to privileged, white, male property owners. Think about how many people are not represented by this. That’s the history we’ve lost. Students quickly understand the limitations of the evidence we have.”

To address this gap, Slepyan teaches students how to uncover undocumented or restricted historical information. Documents such as baptism records, church registries, and wills give information on family size and property ownership, which can help describe the life experience of marginalized populations.

Slepyan has a knack for uncovering untold stories. When researching his book Stalin’s Guerillas about the Soviet partisan movement in WWII, he arrived in the former Soviet Union just after the 1991 coup. Because of his fortuitous timing, he was one of the first historians with unlimited access to formerly restricted archives.

Slepyan uses his research as “fuel” for the classroom. “I am very happy to be at an institution where I can focus on teaching,” he says. His enthusiasm for learning is contagious. “When I’m excited, they’re excited.”

Away from campus, “history is in the house.” Slepyan and his wife, Karen Petrone, chair of the University of Kentucky history department, love to talk about history over dinner, much to their daughters’ dismay. Slepyan makes it up to them by being the best soccer dad he can, chauffeuring them to their games. A former marathoner, Slepyan still averages 30 miles a week on the trails.

“Battle Fronts and Home Fronts: The War in the East from Stalingrad to Berlin” in A Companion to the Second World War 2 vols., ed. Thomas Zeiler (Blackwell-Wiley Publishing, 2013)