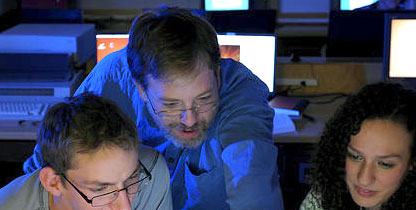 As a professor, there is nothing that Kenneth Moorman enjoys more than seeing one of his students succeed in the post-Transylvania world. Unless, of course, it’s convincing non-computer science majors that the subject near and dear to his heart can offer something of value to them as well. Either way, Moorman revels in his students’ success, something he’s grown quite accustomed to since joining the Transylvania faculty in 1997.

Part of that success is due, in part, to Moorman’s belief that the undergraduate classroom, where the presentation of information is critical, should not focus on “dry lectures.” Rather, he says, the classroom should provide “opportunities for active involvement by the students.”

“Most computer science courses have a significant hands-on aspect; this needs to be encouraged with both formal lab sessions and independent work,” Moorman adds.

Likewise, Moorman believes undergraduates should be exposed to research-style projects to prepare interested students for further work in research. Several of his students have worked with him over the summer, including one who created a chess playing system on a new chip architecture and another who programmed a variation of the SLAM robotic navigation system on a Sony AIBO dog.

In addition, to help prepare students for the workplace, he insists on providing opportunities for group work.

“While individual work is important, it is also relevant to future work experience to learn how to work in and contribute to a team effort,” he says. “Many students feel uncomfortable with this approach, especially those expecting to receive credit based solely on their own efforts, but it is an undeniable fact that many real-world projects are group ones.”

Moorman’s teaching philosophy meshes well with the Transylvania liberal arts approach to problem solving, which he says enables student to succeed no matter which postgraduate route they take.

“Whenever possible, a background of interdisciplinary topics should be the foundation of any course. No course stands alone; every one represents an opportunity to demonstrate how a particular field fits into a larger context of learning,” he says.

Further, “this liberal arts approach aids the student by emphasizing learning over simply remembering the facts of a particular field. The ultimate goal is to produce a general-purpose thinker.”

Throughout Moorman’s tenure, he has taught a variety of courses, including the extremely popular Game Design course, operating systems, artificial intelligence, introduction to robotics, and computer organization. He is widely published on topics of creativity, reading, science fiction, and comic books.

Tyler Scully and Kenneth Moorman, “The rise of vigilantism in 1980 comics: Reasons and outcomes,” The Journal of Popular Culture (accepted).

“The Depiction of Artificial Intelligence in Robert A. Heinlein’s Work,” Foundation: The International Review Of Science Fiction, 108, 2011.