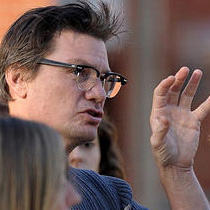 If you Google cannibalism, James Wagner’s name will come up. The Transylvania biology professor is an expert on the ecological and evolutionary aspects of cannibalism among generalist invertebrate predators. In lay terms, he studies why wolf spiders eat their young.

Wagner’s research has gained him national exposure, first on a Discover Magazine segment on The Discovery Channel and recently on an episode of Weird, True and Freaky on Animal Planet. He also hosted a national meeting of the American Arachnological Society at Transylvania. His teaching expertise was recognized when he was named the 2001 Kentucky Professor of the Year by the Carnegie Foundation for the Advancement of Teaching and the Council for Advancement and Support of Education.

Wagner shares his enthusiasm about biology in both conventional and unconventional settings.

He’s enthusiastic about Transylvania’s newly renovated science labs, which he helped design. “Science has gotten so complicated and it’s so collaborative now,” says Wagner. “Transylvania’s new labs are extremely flexible and encourage students to work together and faculty members in various disciplines to share the space.”

The biology lab’s Beckman Coulter CEQ 8000 genetic analysis system, a sophisticated gene sequencer typically found only at large research universities, is another plus. “This device is what you see on the CSI shows, where DNA analysis is used to help solve crimes” says Wagner. “It’s what modern biology is dealing with, and our students have an enormous advantage by getting hands-on experience with the machine.”

Wagner also takes students to field sites, including a May term Tropical Ecology class in Hawaii, where they connect biology with geology and ecology to see the big picture.

“Because of its overwhelming diversity, Hawaii is hard to beat as a natural laboratory for the study of tropical animals and plants,” he says. “Hawaii has an incredibly high percentage of unique terrestrial species, including over 1,000 species of native plants, 135 endemic species of birds, and at least 5,000 insect species—plus some really cool spiders.”

Co-authored “Stratification of Forest-Floor Spiders,” published in the Journal of Arachnology, 2003