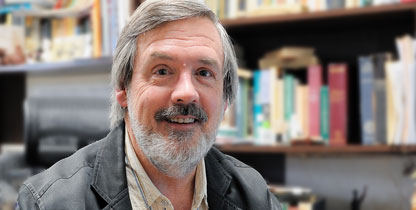 John Svarlien teaches courses in Latin and ancient Greek, literature, mythology, gender and sexuality, and other aspects of the cultural history of the Greco-Roman world. He also teaches in Transylvania’s core courses.

Svarlien has published on Roman satire, and his translations of Latin literature have appeared in journals and on the Diotima website. His translations of Ovid’s Amores have been published in an anthology of Latin lyric and elegiac poetry, and his verse translation of Horace’s Satires is forthcoming. His special interests are Augustan Rome and the history of liberal arts education.