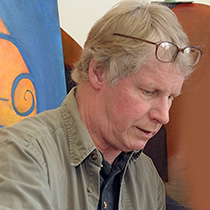 Jack Girard’s primary medium is collage, although he frequently works in paint, assemblage, and installation. His work has been included in numerous exhibitions and is represented in many corporate, institutional, and private collections in the United States and overseas.

Artwork Included in the Following Collections

David and Betty Jones faculty development grant for research on the art and poetry of Margarita Merino in Maryville, TN (2016); conference travel for presentation at the International Conference on the Image, Liverpool, England (2016); Juan Carlos Mestre in Madrid, Spain (2014); research in Ballyvaughan, Ireland (2011 and 2009); field research in Berlin, Germany (1998); collaborative installation

“Bathtubs Teeming with Frogs: Confluence of Form in the Multi-modal Work of Spanish Artist and Poet Magarita Merino,” International Conference on the Image, Liverpool, England, September, 2016

“Isolation and Alienation in the Art and Poetry of Juan Carlos Mestre,” The International Journal of the Image, Common Grounds Publishing, Vol. 3, Issue 4 (electronic), 2013 (co-authored with Dr. Veronica Dean-Thacker)

“Facing the Unknown in the Art and Poetry of Juan Carlos Mestre,” Third International Conference on the Image, Poznan, Poland, 2012